Carl Friedrich Gauss, the German mathematician, one of the “Greatest of the Greats”, who is often referred to as the Princeps mathematicorum, the foremost of mathematicians had an exceptional influence in many fields of mathematics and science, and is ranked among history’s most influential mathematicians. There are different anecdotes about his early genius.

According to one of them, in primary school after the young Gauss misbehaved, his math teacher requested him to add the list of integers from 1 to 100. The teacher thought it would take a while to complete the task but the young genius produced the correct answer within seconds. The teacher was bluffed and — according to the anecdote — he asked the young guy how he did it. Gauss’s method was to add 1 to 100, then 2 to 99, the 3 to 98, continuing up to 50 to 51, and as all these sums of pairs have the common value 101, and there are exactly 50 pairs of this type, the total sum is 50 times 101, which is 5050.

Arithmetic progressions have nice properties — some of them even characterize this concept. One characteristic property is that if we choose any term of such a progression, and two terms which are located in the sequence symmetrically with respect to this term then the average of these two latter terms is the one we started with. In mathematical terms, if

is any term of the sequence, then for each natural number

which is less than

steps backward from the

-th term. No matter how many steps we go forward and backward.

You may ask now how this all relates to Gauss — but I hope you’ll get the answer immediately. Yes, the teacher of the naughty genius wanted him to sum up the arithmetic progression of the natural numbers from 1 to 100. The sum of all terms is clearly equal to their average multiplied by the number of terms — and Gauss figured out immediately that the average is equal to the average of the first and the last term: the half of (1+100)/2, and multiplying by the number of terms, which is 100 we get the blitz result: 50 times 101=5050.

There are some other simple questions about arithmetic progressions: one of them is how to compute the

-th term is obtained by adding the difference

times to the starting term. In other words:

Another basic question is whether two different terms determine the progression uniquely? The idea is that if we plot the terms of an arithmetic progression in a coordinate system, then all the terms will lie on a straight line: this is the consequence of the linear character of the previous formula. Moreover, geometrically it is clear that a straight line is uniquely determined by any two different points on the line. Well, a straight line is infinite, and it is uniquely determined by a point on the line and by the slope. However, in the case of arithmetic progressions, even in the infinite case, we need a starting term: two different terms determine the “slope” only, which is the difference of the progression.

On the other hand, if we know the “rank”, i.e. the serial number of the terms, that is not just

, then we are done: indeed, from the above formula we have

Still another related problem is how to sum up all terms of an arithmetic progression, which makes sense only if the the sequence is finite. We should perform the following operation:

denotes the sum of the first

. Clearly, we can use the formulas: 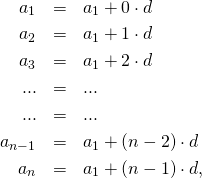 and sum up these equations to get

which is not very nice due to the dots on the right side. Here we can apply Gauss’s method: how did it work exactly? He added the first term to the last, the second to the last but one, etc. He had good luck, as the number of the terms was an even number, hence each term had a pair. Finally, he summed up the sums of all pairs. We can modify his method just a little bit so that it works also in any case, no matter of the number of the terms is even or odd. In fact, we write

using increasing, and decreasing order of the subscripts. Now we can add the two equations to get

where in the brackets the sum of the subscripts is always

. And now we apply what we have seen above: the sums in the brackets are all the same! Hence we can write

which expresses the obvious fact that the sum of the first

times the average of the pairs which are located symmetrically to the “middle” of the progression, no matter if this “middle” is a term of the sequence, or not. This formula expresses the sum of the first

terms using the first term, the last term and the number of terms. We can apply this last formula for the Gauss–job to get

If we want to use the first term and the difference only, then we can replace

to get the other form of this sum:

Now you can check yourself: are you ready to solve problems about arithmetic progressions? Following the tricky Prince? Ready, steady — go to the problems!